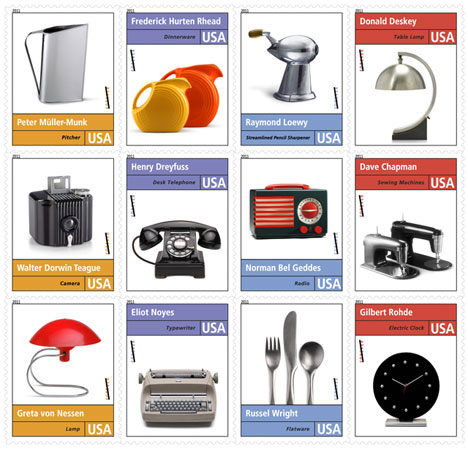 The Pioneers of American Industrial Design stamp pane honors 12 of the nation’s most important and influential industrial designers. Encompassing everything from furniture and electric kitchen appliances to corporate office buildings and passenger trains, the work of these designers helped shape the look of everyday life in the 20th century. The stamps go on sale in July 2011.

Industrial design is the study and creation of products whose appearance, function, and construction have been optimized for human use. It emerged as a profession in the U.S. in the 1920s but really took hold during the Depression. Faced with decreasing sales, manufacturers turned to industrial designers to give their products a modern look that would appeal to consumers. Characterized by horizontal lines and rounded, wind-resistant shapes, the new, streamlined looks differed completely from the decorative extravagance of the 1920s. They evoked a sense of speed and efficiency and projected the image of progress and affluence the public desired.

Even as streamlining gave way to new looks in the 1960s, the groundbreaking work of industrial designers continued to transform the look of homes and offices across the country. Today, industrial design remains an integral component of American manufacturing and business, as well as daily life.

Walter Dorwin Teague
Known as the “dean of industrial design,” Walter Dorwin Teague believed that good artistic design fit both form and function into a single aesthetic package. During his career-long collaboration with Eastman Kodak Company, he designed several popular cameras, including the 1934 “Baby Brownie” (shown on the stamp).

Norman Bel Geddes
A founding member of the American Society of Industrial Designers, Norman Bel Geddes was a noted champion of streamlining. “Speed is the cry of our era,” he once said, “and greater speed one of the goals of tomorrow.” The author of highly influential books on design and urban planning, Bel Geddes created visionary new looks for cars, trains, planes, buildings, even entire cities.

Raymond Loewy
Raymond Loewy arguably did more to define the look of modern America than perhaps any other industrial designer. Loewy created the distinctive look of Air Force One and worked with NASA on the interiors of America’s first space station, Skylab. In 1971, he created the logo for the newly formed U.S. Postal Service, and his designs have appeared on several postage stamps.

Donald Deskey
Donald Deskey is best known for the lavish Art Deco interiors he designed in 1932 for Radio City Music Hall in New York City. However, he was also one of America’s most innovative industrial designers. A founding member of the American Society of Industrial Designers, Deskey was instrumental in winning public acceptance for modern design.

Gilbert Rohde
Gilbert Rohde was one of the most influential and innovative furniture designers in the U.S. His designs for Herman Miller in the 1930s and 1940s were based on simplicity and practicality and marked the beginning of modern design at the company.

Greta von Nessen
Greta von Nessen specialized solely in lighting, and none of her designs is better known than the “Anywhere” lamp (shown on the stamp). Introduced in 1951, the lamp featured a tubular aluminum base and an adjustable shade made of enameled metal. This and several other of von Nessen’s lamps have been featured in industrial design exhibitions at the Museum of Modern Art.

Russel Wright
Specializing in household products, Russel Wright revolutionized the way we live at home. He designed at a time when growing numbers of Americans were shedding the prim conventions of the early 20th century in favor of simple and informal practicality. During his career, Wright created affordable modern furniture and tableware characterized by minimal but elegant forms.

Henry Dreyfuss
Considered by many to be the first designer to apply ergonomics systematically to product design, Henry Dreyfuss considered the user to be the center and focus of his industrial design work. During a career that lasted more than 40 years, he designed products that touched all corners of American life, from household appliances like clocks, sewing machines, and vacuum cleaners to tractors and even the comfortable interiors of trains and planes.

Peter Müller-Munk
Peter Müller-Munk is best remembered for the “Normandie” pitcher featured on the stamp. Introduced by the Revere Copper and Brass Company in 1935, the mass-produced pitcher was made of chromium-plated brass, an alternative to silverware that was affordable and easier to care for.

Dave Chapman
Honored by the Industrial Designers Society of America for his “vigorous sponsorship and backing of design research and high standards of industrial design education,” Dave Chapman is probably most known for his innovative and award-winning designs for classroom furniture. He also designed household appliances like refrigerators, hairdryers, radios, and electric heaters. Shown at the first exhibition of the American Society of Industrial Designers in 1947, Chapman’s streamlined sewing machines (shown on the stamp) featured a chrome grille that evoked the sleek look of contemporary automobiles.

Eliot Noyes
Eliot Noyes bridged the gap between business and art, transforming the industrial design profession into more than just a commercial venture. Rather than continue the practice of changing a product’s design every year, Noyes persuaded his corporate clients to adopt long-lasting design principles instead. He is best remembered for his long working relationship with IBM, for whom he designed buildings, interiors, and a range of office equipment, like the iconic 1961 “Selectric” typewriter pictured on the stamp. He also helped IBM and other companies develop a distinct and consistent identity.

Art director Derry Noyes selected objects designed by 12 of the nation’s most important and influential industrial designers to feature on this colorful pane of self-adhesive stamps. The selvage features a photograph of the “Airflow” fan designed by Robert Heller around 1937. Denis Farley photographed the fan for The Macdonald Stewart Foundation.

Each stamp includes the designer’s name, the type of object, and the year or years when the object was created. The pane’s verso includes a brief introduction to the history and importance of American industrial design, as well as text that identifies each object and briefly tells something about each designer.